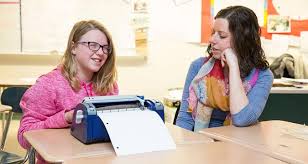 Learners with visual impairment are students facing different nature of diverse difficulties that require adequate attention in by educational management in order to achieve good academic performance when placed in setup of educational institutions. Sight has a lot to do with academic performance; it is the main contact with illustrations and instructions slated during teaching-learning process, it is the first skill among the receptive skills, it passes information to cognitive skill for interpretation, and also, it reads actions and reactions among others of its benefits. But, there are some learners who are deprived of this useful organ either by nature or other circumstance, if this people miss the joy of seeing, this does not make it a proof that they must miss the benefits of education.

Some people in the society believed that those with visual impairment cannot perform better in their academic excellence because they are missing an important organ of learning, research has proof this wrong; disability is not inability. However, there are factors that can make or mar the educational performance of this physical challenge people. Among these factors are home and environment. Home and environment are primary factors affecting any facets of life.This presentation will focus on this majorly. However, this presentation will be guided with the following subheadings;

Many people have misinterpreted the meaning of academic performance to be an excellent result of an exam or educational exercise. Williams (2016) observed that when people hear the term “academic performance” they often think of a person’s final result in a term or session. However, several factors indicate a student’s academic success. While some may not graduate top of their class, they may hold leadership positions in several student groups or score high on standardized tests.

In nutshell, academic performance is generally refers to how well a student is accomplishing his or her tasks and studies. Majorly, the score of the learner in his or her continuous assessment does determine his or her academic peformanc in educational setting.

Receptive skills are skills that a student uses to receive information. This includes listening and seeing; we listen to explanation of note written that we see.

Cognitive skill deals with thinking faculty. It is the ability of the brain of a student to process the information see or hear. For instance, it is cognitive skill that proves it right that 2 + 2 = 4 and not 22.

Productive skills are skills that proof to the teacher that what he taught in the class is well understood by the student. They include speaking and writing skills.

The fact to point out here is that eye is an important organ in teaching learning process. If there is a defect in it, to achieve academically may be difficult for the student who is with such impairment.

Visual Impairments refer to Loss of vision, even when an individual person wears corrective lenses. According to Keefe (1999), visual impairments are the reduced vision caused by Eye Diseases, Accidents or Eye conditions present from birth. Visual impairments include blindness that even with correction adversely affects a child’s educational performance (Olmstead 2005). This is categorized into the blind and the low vision.

The research conducted by Special Education and Rehabilitative Services (2000), it was stated that learners with visual impairments display a wide range of vision difficulties and varying adaptations to vision loss. With regard to degree of vision, the student population includes persons who are totally blind or persons with minimal light perception, as well as persons with varying degrees of low vision. For some individuals, blindness or visual impairment is their only disability, while for others, blindness or vision impairment is one of several identified disabilities that will affect, to varying degrees, learning and social integration. For example, some children who are blind or visually impaired also have hearing, orthopedic, emotional, or cognitive disabilities.

With the meaning of visual impairment, it is certain that visual impairment it is an impediment to the performance of student academically because one of the organs which he or she needed for understanding has been affected.

This impediment brings about the challenges facing learners with visual impairments in their academic pursuits.

Challenges Facing Learners with Visual Impairments in their Academic Performance

The stated restrictions adversely affect the learning of children with visual impairments. According to (http/www/unco/2010), only a thorough understanding of these limitations can lead to special methods in education of learners with visual loss. The teaching of Braille and other tool subjects in which the remaining senses take the place of sight are only the obvious and elementary attempts to meet the needs of the learners withvisual impairment.

Special provisions to this group of learners must take into consideration all implications of perceptual restrictions which go far beyond adaptation of tool subjects. According to (http://www.tsbvi/2011), totally blind students who are born without sight or those who have lost their sight early in life must build up their conception of the world by the use of their remaining senses. In doing this, they rely almost entirely on tactual and auditory perception and kinesthetic experiences.

Although auditory sense provides certain clues in regard to distance and direction, it does not convey any concrete ideas of objects as such. The main importance of the sense of hearing to a learner with visual impairment is to facilitate verbal communication and aid in movement. Hearing therefore is of very limited value in acquisition of concrete clues of an object for a learner with visual impairments.

Learners with Visual Impairments have limited ability to coordinate and organize elements into higher levels of abstraction, and to verify the information. As a result, they need a keen support. Availability of this support will aid their sensory development and improve their academic performance. On the other hand, the absence of this support will make them useless in the society and their disability may result to inability to perform on educational field.

Home and environment are the first places that determine the achievement of every student; “charity begins at home” and “A sheep that stroll with dog will eat feces” are the popular proverb that backs this up.

The constituents of home are the parents; they are the bedrock for their children. Their care and attitudes have a lot to do in the success of these children in their academic pursuit. All children need parental support. But that of children with visual impairments need more support.

The effect of parental involvement on academic performance has received a significant amount of research attention in the general student population but surprisingly very little research has been conducted in this area for students with disabilities (McDonnall, Cavenaugh, and Giesen; 2009). As home is the first social and most reliable interaction for children with visual impairment,parental involvement has a positive and significant effect on children’s overall academic performance. Their assistance to read, explain and make concrete the subject taught in school in a loving and caring will assist these learners better than the explanation made in classroom(Nye; 2006).

As parents and guardians are rendering home assistance for these learners on some routine activities like cooking, washing, house choirs, and personal hygiene, if this assistance is also extended to their cognitive development on educational, these learners will perform better than expected in their academic pursuit. In his observation, Raheem H.O. (2015) stated that without home support for learners with a particular or some impairments, such learners success will only be a mirage, that is, a dream that will never come true.

Among the home assistance that can have a positive effect on academic performance of children with visual impairments are;

Chieu (2014) affirmed that it is a general societal statement that “disability means useless”, and disability comes from the sin of the parents in previous lives or the disabled individual’s previous life; it needs to be hidden. Therefore, people are not necessarily interested in educating visually disabled persons to be independent and prevent them from enhancing their potential.

Environment plays major role in the life of every individual whether a students, teachers, abled or dis-abled children. The issue of stigmatization, discrimination, and social rejection will have much negative effects on the academic performance of these learners.

Actually, there are different types of environment; social-environment, class-room environment, academic-environment and their likes. However, what is important is that environment constitute of different group of people and it is expected that individual in the environment should have duties to render as they will also have rights to claim.

Mobolaji H. (2012) stated that in a meaningful environment, no man should be left idle, even the least man should have a role to play. This will bring equality in human rights and human responsibilities in an egalitarian society.

If learners with visual impairments are not allowed to have a free interaction with their environment or there is stigmatization from in the environment, their self-confidence, and reliance will be faded and this will affect their academic performance. Chieu (2014) opined that if sighted students were ashamed and nervous of their blind peers. They will not be able to make friends and interact with them, hatred and enmity will grow between them, and normal assistance that supposed to be rendered for them so that they too can be successful in their pursuit will fail. The scholar further affirmed that students with visual impairments are less self-confidence and more shy in front of the public. But with positive reinforcement from their peers like clapping, hailing, and positive words, they will gradually become more optimistic and perform better than taught.

Stigmatization, prejudice, and rejection of children with visual impairment should be fought morally and educationally by orienting the public on negative impact of this on the learners with visual impairments. These people people need our support and affection, they may be blessed with talent more than ours but this may not be explored if they are not given social support (Raheem; 2015).

From the research presented above, it is affirmed that academic performance is not all about having big grades at the end of the term or session, it is majorly about performing better in an educational pursuit.

Also, eye is a major organ that aids receptive skills for learners. Any defect that happens to it will also affect the cognitive skill of such learners and this will result to low performance in academic pursuit.

Moreover, home and environment are major factors that affect academic performance of learners with visual impairment either positively or negatively. The key-factor of home, parents or guardians should always render supportive hands for these learners in a caring and loving ways so that their cognitive and psycho-motor development can grow better.

In addendum, society should avoid stigmatizing, prejudice, and rejection of these learners. They should rally round them, show them positive gesture, and assist them so that they can excel in their academic pursuit. Also, they should assist them in sustaining their confidence and support them on public presentation and participation.