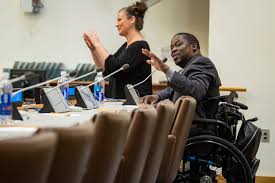 No human being despite the state of his or her being is useless. Such a person can only be rendered useless if his or her right is deprived. People with intellectual disability also have their roles to play in societal reformation. What is most important is that they should be given their rights and employed into the activities of national development.

In line of this, this paper will discuss the following synopsis;

Intellectual disability characterised by significant limitations both in intellectual functioning and in adaptive behaviour which cover many everyday social and practical skills. This disability originates before the age of 18.

In support of this, Arc (2011) also stated that intellectual disability is a disability that occurs before age 18. People with this disability experience significant limitations in two main areas:

These limitations are expressed in the person’s conceptual, social and practical everyday living skills. A number of people with intellectual disability are mildly affected, making the disability difficult to recognize without visual cues.

The point made by webMd Magazine make it clear that people with intellectual disability are not absolutely useless, they can and do learn new skills but the disability aspect of it is that they learn them more slowly.

As stated in medical-dictionary, intellectual disability is a developmental disability the first appears in children under the age of 18. It is defined as an intellectual functioning level (as measured by standard tests for intelligence quotient) that is well below average and significant limitations in daily living skills (adaptive functioning).

This fact established that people with intellectual disability can adapt with societal standard if they gain support from people. Also, they have the ability to execute job they do once they have a support.

Finally, most of those who are intellectually retarded are either born with it or develop it before them are of 18. This shows that most of them are not the intended causative agents; society, family, and lack of health care are likely reasons for this disability.

CATEGORIES OF CHILDREN WITH INTELLECTUAL DISABILITY

Medical-dictionary stated the categories of those who are intellectually or mental retarded thus:

Reference.com stated that Federal governments draw up national development plans and policies based on the perceived needs of their citizens. Many include an emphasis on reducing poverty, affordable and available housing and community development.

The goal of all national development is to improve the lives of the citizens in question within the context of a growing economy and an emphasis on the good of the community as a whole.

The development process must be visualised in its broadest context if it is to meet the expectations of the citizenry for a more elevated standard of living. Accordingly, the most all-encompassing goal of development is the progressive realisation of the abilities and talents of each individual for his/her own satisfaction and enhancement of the good of the community and the nation.

This overall concept and goal is adopted as the principal guiding orientation of the National Development Strategy. Fulfilment of the following broad national objectives has been established as a precondition for the achievement of that broad goal:

Given the still-lagging state of our economy, substantial increases in incomes, in the sense of purchasing power, will be essential to permit our citizens to realise their talents and aspirations. For this reason, including intellectual people to the race of national development will be highly essential

CHALLENGES FACING PEOPLE WITH INTELLECTUAL DISABILITY IN THE SOCIETY

Individuals living with intellectual disabilities face both personal and external challenges in life. A child with an intellectual disability may learn to sit up, crawl, walk, and talk later than other children. Individuals with intellectual disabilities may experience difficulty learning social rules, deficits in memory, difficulty with problem solving, and delays in adaptive behaviors (such as self-help or self-care skills). They may also lack social inhibitors. Everyday tasks that most people take for granted, such as getting dressed or eating a meal, may be possible, but they may also take more time and effort than usual. Health and safety can also be a concern; for example, knowing whether it is safe to cross a street could pose a problem for someone with an intellectual disability. The exact combination of challenges varies from one person to another, but it typically involves limitations in both intellectual and daily functioning.

National Development focuses on making life easy for all citizenry. People with intellectual disability are also members of the society. They should not be given societal deprivation. They should also be considered as useful elements of the society, as a result, they should be given the total right and privilege of participating in national development. They too can play a pivotal roles in sustaining our nation.

SEMINAR PAPER: Effects of Home and Environment on Academic Performance of Learners with Visual Impairment